Obama’s Affordable Care Act grants almost all US citizens health insurance by 2014 and international health care providers are wondering how this will affect medical tourism.  Today, many US citizens travel abroad for their health care needs because it is so much less expensive.  However, more affordable health care in the US has them unsure of their future.

Although Obamacare supporters believe the bill brings Americans closer than ever to universal health care, nay sayers believe a doctor shortage and longer hospital waits in the United States could be in the future.

To give an idea of the size of the medical tourism field, in December 2010, consulting firm Frost & Sullivan put the industry’s global worth at $78.5 billion.  According to Promed, in 2010, Costa Rica attracted nearly 36,000 medical tourists — primarily US and Canadian citizens — who spent almost $295 million in the country.  In 2011, Patients Beyond Borders, a consultancy firm, put it at $15 billion, counting 5 million patients worldwide.  Estimates for how many of the patients were American range from 550,000 to 1.6 million.

Americans have confidence in international physicians and surgeons because many train at top US medical schools, return to their homeland — whether in Mexico, Central or South America, or Asia — and provide competitive treatment to anyone who can afford it.  The idea of receiving quality medical care in conjunction with a tropical vacation while recuperating, for often less than they would pay in the US, is currently very appealing to many North Americans.

Are you living abroad full or part time and concerned about critical illness or accident coverage? If you spend six months a year or more outside your home country, you qualify for international major medical insurance.  The six months do not have to be consecutive and you do not have to report your comings or goings.  In the event of a claim, your stamped passport is proof of your travels should the claim … END_OF_DOCUMENT_TOKEN_TO_BE_REPLACED 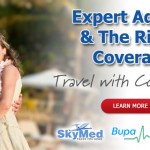 American Insurance for Expats offers Medical Travel Insurance. Coverage is per day or per month.  Choose your length of time, your policy limits and your deductible. No medical underwriting, coverage starts as soon as the next day. Click Here to Apply Now! You have enough to worry about when you're traveling. Don't let your medical coverage be an uncertainty. Our international travel insurance offers excellent … END_OF_DOCUMENT_TOKEN_TO_BE_REPLACED

Protect Your Hard Earned Money  Our Vacation Travel Insurance is designed to provide essential coverage for trip cancellation, travel and baggage delays as well as emergency medical treatment. Vacation travel insurance is perfect for U.S. residents taking international or domestic vacations. Even the best laid plans have to be changed sometimes due to circumstances beyond our control.   Vacation Travel insurance … END_OF_DOCUMENT_TOKEN_TO_BE_REPLACED